The Federation is operated by JANET (UK) on behalf of JISC and Becta and brings the entire UK education and research sector a step closer to achieving single sign-on to network and online resources.

The Federation’s membership consists of colleges, universities, local authorities, Regional Broadband Consortia and service providers such as publishers of online resources. Membership is expected to continue on its rapid growth trend in the coming months. 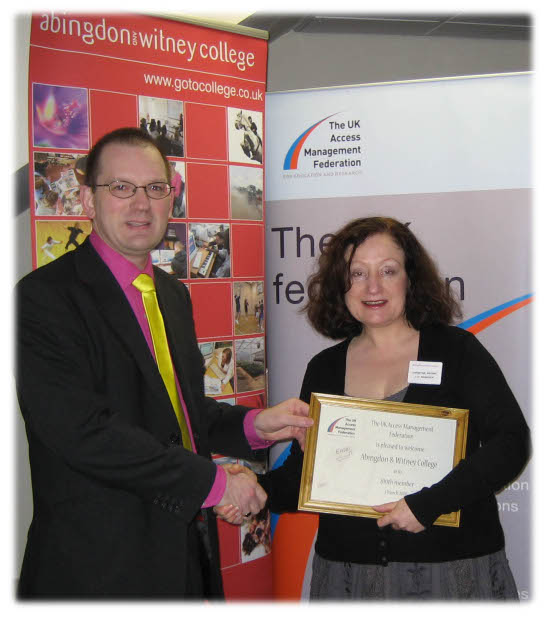 Tim Kidd, Head of Operations at JANET(UK) congratulates Christine Brown, Head of Library and Learning Centres, Abingdon and Witney College on becoming the 200th member of the UK federation.

Nicole Harris, Senior Services Manager at JISC, said: “The fact that the membership of the UK Access Management Federation has more than doubled in less than six months is evidence of growing enthusiasm for federated access. It is also indicative of the importance of an open standard approach for our institutions and service providers within our community.

“We’ve observed that to date, 95 per cent of UK Federation members have chosen Shibboleth as their preferred platform. Shibboleth has proved popular because it is immediately available, easy to customise and well supported internationally. It builds on existing institutes’ structures, can be operated in-house and is subscription-free as it is based on open source software.”